The Spirit of Flight Foundation recently announced a program to help the organization complete the construction of their new museum facility at Nampa Municipal Airport in Nampa, Idaho. Anyone who donates $25 or more towards the Spirit of Flight Foundation before the end of the year will be entered into a raffle, with the prize being a beautiful reproduction Bronze of the Bendix Trophy, one of early aviation’s most famous prizes. In addition to a chance at winning the Bendix Trophy replica, the first 500 donors contributing $100 or more will also receive a free Bf 109 Plane Tag cut from wing skins which originally held aloft an example of the Luftwaffe’s most famous fighter plane. (The Spirit of Flight Foundation has their own Messerschmitt restoration project, this being Bf 109F-4 WkNr.10145). Random drawings for other prizes will take place throughout the competition period. The grand prize drawing for the Bendix trophy reproduction is currently scheduled to take place at the new museum site on December 31, 2021 (provided total donations exceed $5,000).

Regarding this fund-raising program, Gordon Page, President of the Spirit of Flight Foundation, stated: “We are excited to give away a reproduction bronze of the famed Bendix Trophy to help build out new displays and exhibits at the new Spirit of Flight… We have a great display for air racing and the pioneers that advanced aviation technology, and many competed for the Bendix Trophy.” 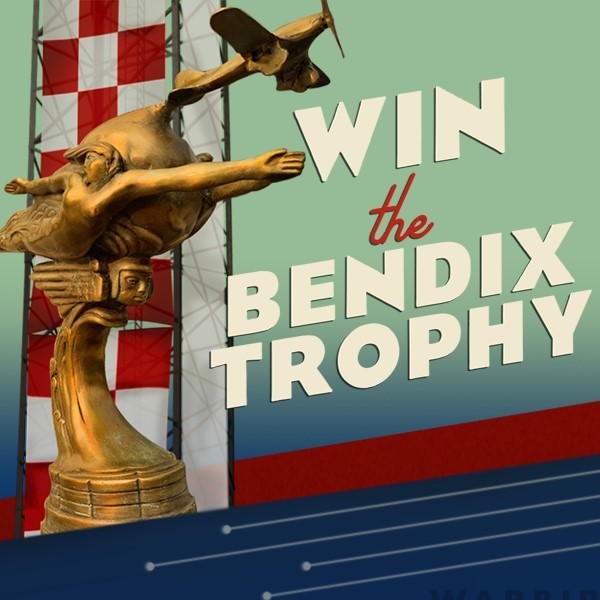 As most readers will know, the Bendix Trophy was created for the winner of a transcontinental, point-to-point race, sponsored by industrialist Vincent Bendix founder of the Bendix Corporation. The race began in 1931 as part of the National Air Races, with an initial prize of $15,000 to the winners. The organizers created the race to spur more rapid technological development in aviation, and this proved very much the case, with many of the advancements which the race inspired proving useful, especially during WWII. For the majority of these races, competitors began their journey from a starting point in California – usually either Burbank or Los Angeles – timing their arrival to coincide with the National Air Races event in Cleveland, Ohio. However, on two occasions (1933 and 1936) the race involved an East-to-West route, beginning in New York and ended in Los Angeles.

Famous competitors for the trophy included Jimmy Doolittle, who won the first race, Roscoe Turner and Amelia Earhart (the first woman to compete in 1935 where she took fifth). Indeed the competition was also one of the first such events to feature women as well as men, with female competitors winning on two occasions: Louise Thaden and her copilot Blanche Noyes won in 1936 (with Laura Ingalls finishing second) while the legendary Jacqueline Cochran took home the 1938 prize. Paul Mantz was the only pilot to win the Bendix on three consecutive years, from 1946 through 1948. While the piston-powered version of the Bendix Trophy race ceased in 1949, the jet-engined class, which first ran in 1946, continued until 1962.

For more information on the competition, please watch Celia Morrissey’s great video below…

About the Spirit of Flight Center: Founded in 1998, the non-profit Spirit of Flight Center facility features over 1000 aviation artifacts. Aircraft in the collection include a James Bond BD-5 jet, a 1947 race plane built by Art Chester, and a radioplane target drone built in the factory where Marilyn Monroe was discovered.

The Spirit of Flight Foundation is a 501(c)(3) non-profit organization and uses tax deductible donations to support its mission to save aviation history.

Contact the Spirit of Flight Foundation at info@spiritofflight.com for more information.