For the past several years, we have been following the Savoia Marchetti Historical Group (SMHG) and the Gruppo Lavoratori Seniores Siai Marchetti in Italy, and their efforts to build a faithful replica of the all-but extinct Savoia-Marchetti S.55X, the twin-hulled Italian flying boat which became globally famous in July 1933 when Italo Balbo lead 24 of them in formation from Orbetello, Italy out over the Atlantic Ocean and halfway across the United States to appear at Chicago’s Century of Progress International Exposition. Although Savoia-Marchetti manufactured more than 250 S.55s, just one complete survivor of the breed remains today sadly, preserved at the now-shuttered TAM museum in Brazil. That aircraft is the one which Commander João Ribeiro de Barros used in his 1927 crossing of the South Atlantic. But with no representative example of this important Italian design residing in the nation of its birth, nor the likelihood of obtaining one, the Savoia Marchetti Historical Group decided to construct a replica to fill this important gap in the national collection. Although non-airworthy, this exhibit will prove a dramatic addition to the Volandia Park and Flight Museum near Milan when it finally goes on display. Andrea Agrati and Filippo Meani now bring us an update on progress with the S.55’s reconstruction…

2023 will be a year of celebration for the Aeronautica Militare Italiana (Italian Air Force), which marks its centenary in April as one of the world’s oldest independent air arms. Next year will also commemorate the hundredth anniversary of the Savoia Marchetti S.55’s first flight! 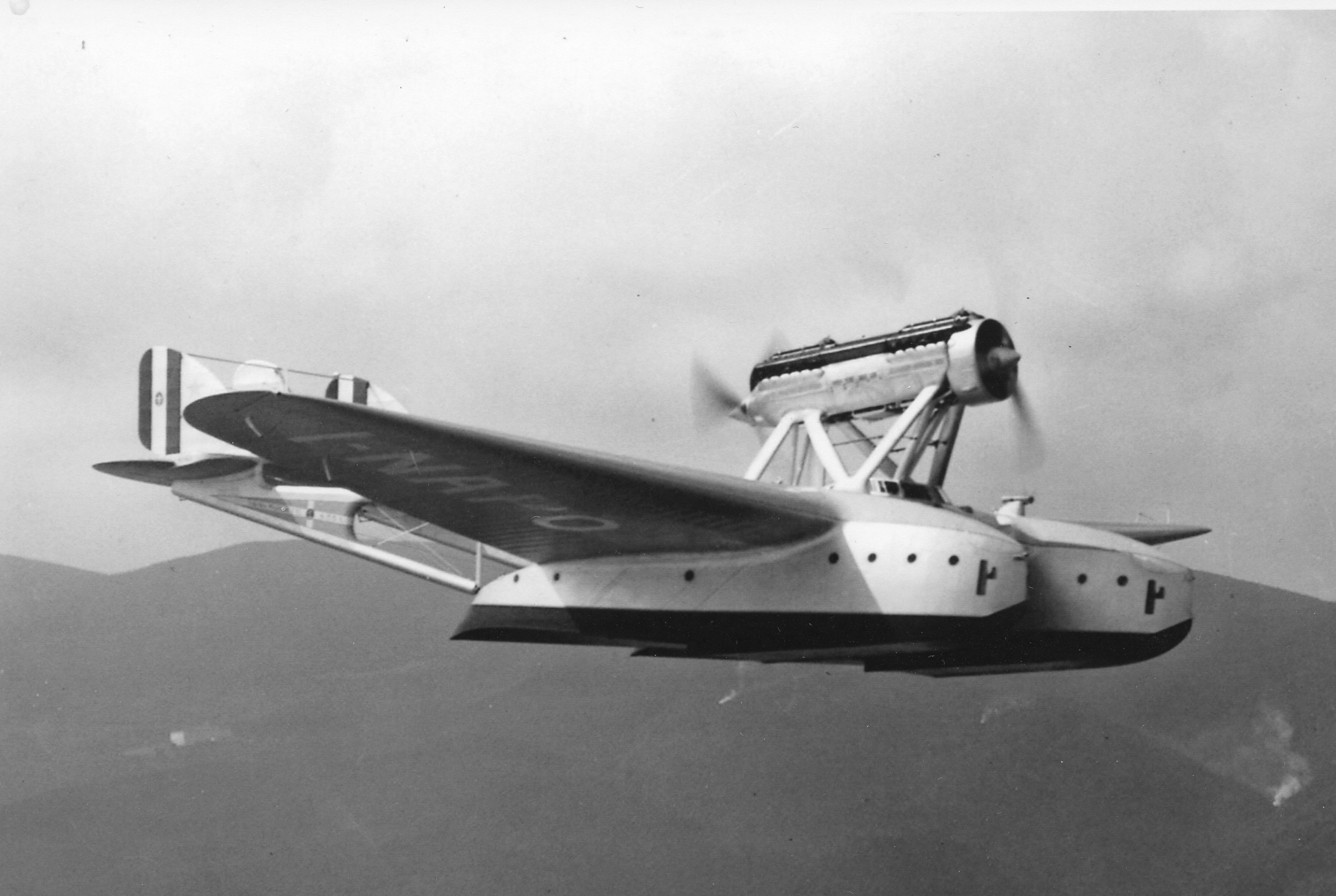 This airplane was considered ahead of its time when it first flew, with a twin hulled, twin boom configuration, and two engines housed in a suspended pod mounted atop of a large continuous wing; one propeller pushing with the other a tractor. July 2023 will see the 90th anniversary of the Atlantic Cruise in which Gen. Italo Balbo led 25 Savoia-Marchetti S.55X flying boats on an epic journey from Europe to North America; they took off from Guidonia, Rome on July, 1st 1933 and flew, via the Azores, to New York City.

From New York, the fleet of S.55X’s moved on to Chicago in the American heartland and then back east to Montreal in Canada. They returned to Rome, stopping off in Iceland and the United Kingdom along the way before arriving at their home base in Guidonia on August 12th, 1923. It was an incredible feat for both the airplanes and aviators who flew them, especially given the technology of the day! 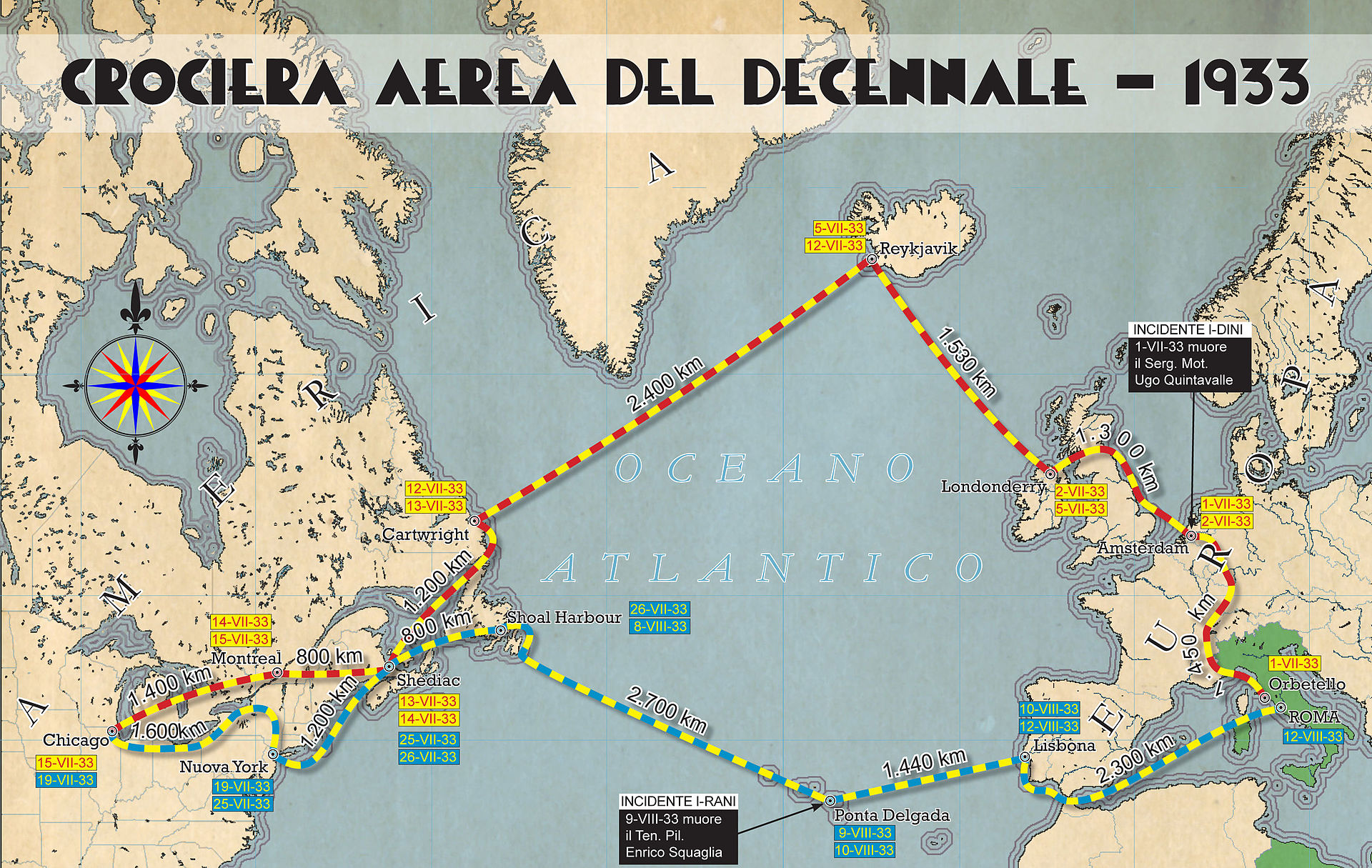 In view of these events and noticing the lack of any existing survivors of this iconic plane on Italian soil, a group of enthusiasts decided in 2015 to start a ground-up reconstruction of a full-sized S.55 replica. The team, largely composed of retired SIAI-Marchetti employees named themselves the Savoia Marchetti Historical Group (SMHG). They also took control of and preserved an immense archive of SIAI-Marchetti documents, which included more than 14,000 original technical drawings dating from as far back as the 1920’s.

By sorting through these original drawings, they were able to located what they needed to build the S.55. They scanned these drawings and, where needed, created 3D CAD parts. SMHG made the epic decision to not simply manufacture a fiberglass cosmetic copy of the plane, but to rebuild it entirely, one piece at a time, using the same materials and construction techniques the original manufacturer had used in 1923, thus making their replica conform to the highest museum standards.

It seemed a mammoth task, given the aircraft’s large dimensions (a 25m wingspan, 93m2 wing surface area, 6 tons of wood, fabric, and metal), but the airframe slowly began to take shape at the Volandia Museum. (Volandia is the second largest aviation museum in Italy, housed in hangars once belonging to Caproni Aviation, the first Italian airplane manufacturer.)

After more than five years of painstaking work on the airplane, through an effortless search for ever lacking funds, a pandemic, and countless daily difficulties, the project is approaching its 75% completion point. This was made possible because SMHG has created a rich network of aircraft enthusiasts, local aviation firms, and even schools and wood workers, to complete the task.

The two massive hulls, the twin booms, connecting tail plane, dummy engines with propeller and airscrews, and the central section are now complete. An original Garelli engine, driving the oil distribution, will be placed in between the two Isotta Fraschini main engines in the engine nacelle. One hull will be displayed with a partial covering, displaying the complex, all-wooden structure which would otherwise be hidden. 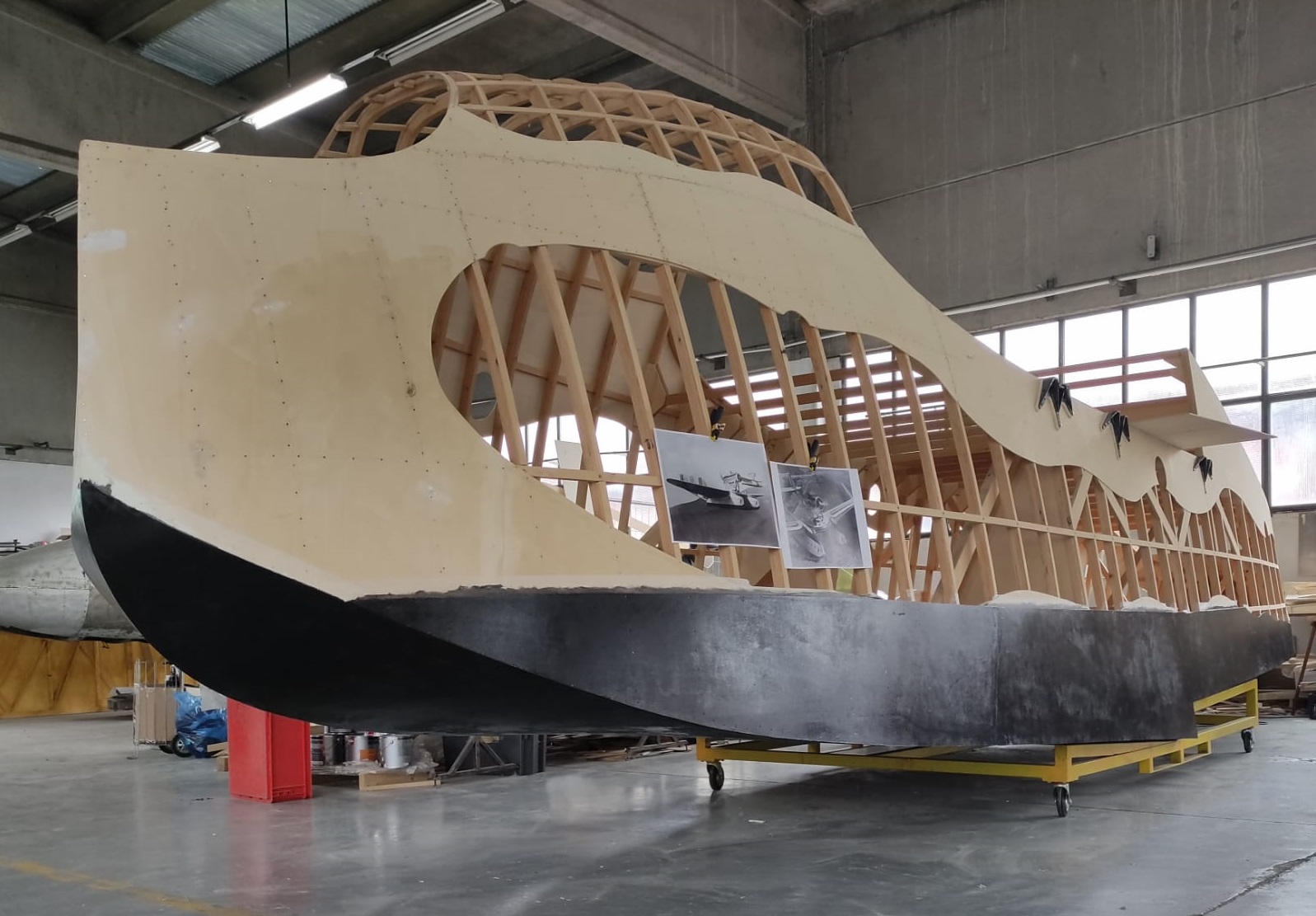 Now the group is concentrating their efforts on finishing the central wing box, where the cockpit is housed, along with the canopy. As of today, the CAD drawings for the outer wing panels have been completed and the job contracted out. 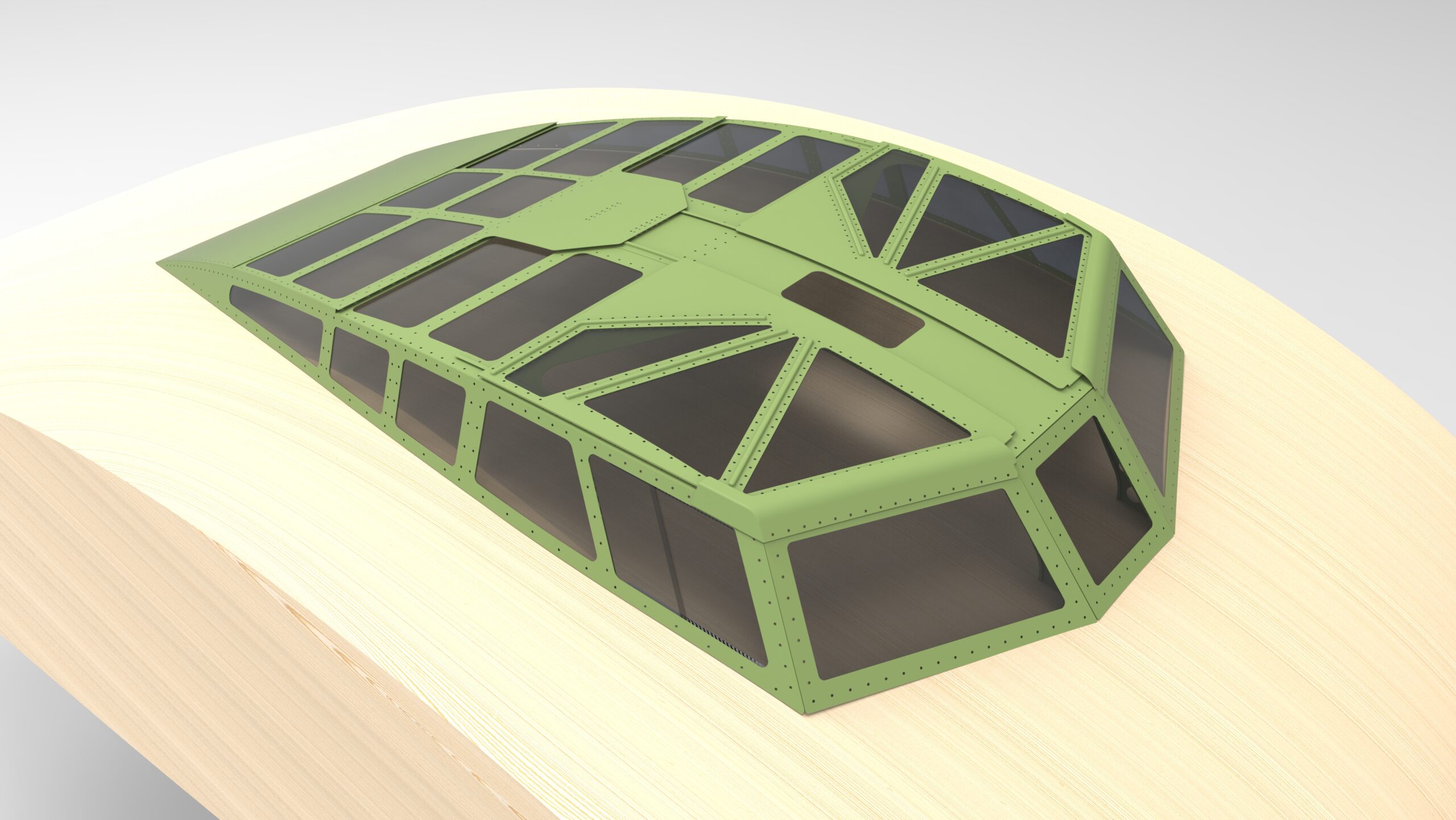 So virtually every part of the airplane is underway, although the April 2023 deadline getting closer and closer! Now the group is also thinking about the unveiling ceremony which will take place in Milan, even if talks are now underway to move the airplane to the Military Aviation Museum at Vigna di Valle, where the major celebration for the Air Force centenary will take place.

SMHG would like to run an aviation art exhibition around the airplane during the unveiling ceremony, with around 10 paintings representing the S.55 X at different points of the famous Atlantic Cruise. Paintings will then form a permanent exhibition around the airplane at Volandia. A book celebrating the airplane, the story of the cruises, and the details of the replica’s reconstruction will also be launched during the unveiling event.

It really is marvelous to see how far this impressive project has come along… it is a testament to what can be achieved with the right group of people involved!