For the past several years, we have been following the Savoia Marchetti Historical Group (SMHG) in Italy, and their efforts to build a faithful replica of the all-but extinct Savoia-Marchetti S.55X, the twin-hulled Italian flying boat which became globally famous in July 1933 when Italo Balbo lead 24 of them in formation from Orbetello, Italy out over the Atlantic Ocean and halfway across the United States to appear at Chicago’s Century of Progress International Exposition. Although Savoia-Marchetti manufactured more than 250 S.55s, just one complete survivor of the breed remains today sadly, preserved at the now-shuttered TAM museum in Brazil. That aircraft is the one that Commander João Ribeiro de Barros used in his 1927 crossing of the South Atlantic. But with no representative example of this important Italian design residing in the nation of its birth, nor the likelihood of obtaining one, the Savoia Marchetti Historical Group decided to construct a replica to fill this important gap in the national collection. Although non-airworthy, this exhibit will prove a dramatic addition to the Volandia Park and Flight Museum near Milan when it finally goes on display. Ugo Vicenzi now brings us an update on progress with the S.55’s reconstruction…

The volunteers from the Savoia Marchetti Historical Group (SMHG) are continuing their effort in the recreation of the mighty seaplane that gained endless fame for its mass transatlantic cruises led by Italo Balbo.

The current workplace is a hangar dedicated to airplane restorations, kindly provided by the Volandia Aviation Museum. The museum itself is located on the western side of Milano Malpensa airport and within the historical buildings which once housed Officine Caproni – one of Italy’s most celebrated, and oldest aircraft manufacturing complexes – so a most appropriate location. Volunteers gather regularly, working mostly on the project’s wooden components with the team leader Ing. Filippo Meani. Naturally, a number of outside subcontractors will provide components where specialized workings are needed, such as sheet metal parts, castings and, of course, the replica Isotta Fraschini Asso 750 engines.

The starboard hull was completed some time ago, constructed in a way such that cutaway sections of its plywood skins will allow visitors to see within the crew compartment and the beautifully-built structure which would otherwise be hidden. The port-side hull is now under construction, as well as the wing center section. The latter structure mates between the two hulls; it houses the control cabin and also supports the engines and their mounting structure. Some of the current work includes the manufacture of major longerons, which provide a magnificent example of the team’s craftsmanship.

The Role of Computer-Aided Design (CAD)

As already intimated, this S-55X will be a scratch-built replica, constructed against original Savoia-Marchetti drawings. The SMHG has amassed countless such drawings from company archives, the majority being in a good state, fortunately. The team’s first job was to classify the drawings, and then scan them in order to distribute digital copies to CAD designers.

3D CAD Design has a key role in the project, as it allows a number of simulations to occur prior to construction, something which would not be economically practical with traditional methods. Working in CAD also greatly reduces the amount of time needed for parts-fit verification checks. While CAD has allowed some elements to be more effectively manufactured using Numerically Controlled milling, the real value of CAD is in simulating the mating-up of various connected components prior to their manufacture, thus helping avoid potentially costly mistakes.

A sophisticated CAD system even allows combining 3D models with blueprints, making it possible to verify interferences and errors between parts realized with 3D CAD and parts manufactured via traditional approaches from reading original drawings. Furthermore, 3D CAD software, with a specialized, sheet metal application, allows for the easier creation of a flat pattern from which to manufacture sheet metal parts featuring compound curvatures. This application provides the exact contour which needs cutting from a metal sheet before the forming process occurs, therefore speeding up manufacturing.

The 3D CAD software also allows designers to accurately compute the expected mass for each component in the design, which is a vital detail when considering the load-bearing requirements of supporting elements, not to mention how they should be transported and/or assembled.

Finding original Asso 750 18 cylinder engines to use on the replica proved a near-impossible task, as they are incredibly rare. Therefore the team decided to construct non-functioning, externally accurate replica engines to install in the airframe while displaying one of the very few existing real engines besides the fuselage so that visitors may appreciate the complexity, precise machining, and finish of a real engine. Since the two replica engines will be mounted on the airframe four meters above the ground, and mostly hidden under their cowlings, it will be virtually impossible for visitors to tell whether they are real or replica from the ground, so this seemed like a small, though practical compromise to make in the S.55’s reconstruction. Interestingly, the construction of these replica engines involved one of the team’s first forays with 3D CAD modeling software.

Indeed, little effort was spared in the recreation of the Asso 750. An original Isotta Fraschini provided the basis for the creation of all engine parts, including internal components which will remain hidden. This will allow a 3D animated simulation of the complete engine for public display; a 3-bank, 18 cylinder engine provides a fascinating set of movements between pistons, connecting rods, and all of the drives associated with valve distribution and accessories!

To construct their replica engines, the SMHG chose Plyform, a company that specializes in the manufacture and assembly of advanced composite materials. Plyform machined the engine components from a large block of Urol resin, which is a high-density, polyurethane and epoxy resin saturated with fillers; it is both easily machinable and produces minimal airborne dust. The replica engines are currently mounted on their support frame, one of the first components which the SMHG constructed. The engines now just need painting and the attachment of cabling for their final presentation.

The next activity was the construction of the wings. Here, the 3D CAD software’s parametric modeling capabilities were put to good use. The rebuild team parametrized the basic rib profile so that all of the different ribs and their derivatives could be more easily realized by simply applying the specific dimensional values from the drawings. Essentially, when you have the basic shape for one rib, you can scale it (parametrize) to create the other examples which have the same or similar shape, but in other sizes. This greatly sped up the task of realizing the 58 ribs present on each wing. Two-dimensional (i.e. flat) drawings were obtained for each element, which then allowed direct cutting of the wood. 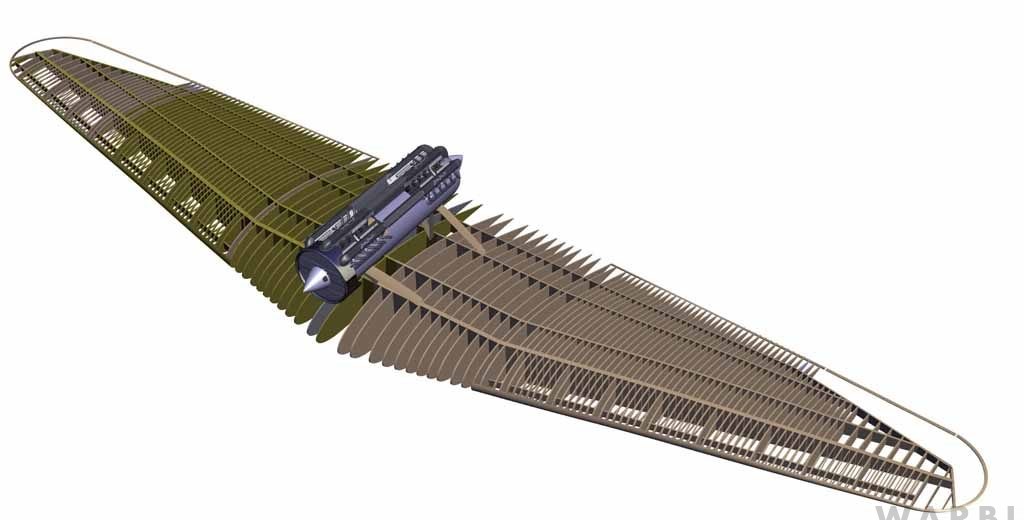 The two engines are housed under a rather complex set of aluminum cowlings, mounted atop a structure of steel pipes, which is then attached to the wooden engine support beams. Here again, 3D CAD was important in precisely defining the panels, which have a tight tolerance regarding the space required for the engine accessories. The team used kinematic mechanisms in the CAD software to simulate the cowling opening/closing procedure, to check for any interferences in the folding processes. Molds for forming the sheet metal cowling elements have been built using 3D CAD, and these will be physically realized before too long to enable component manufacture.

And that is how far work has progressed with the S.55X at present. We look forwards to learning more as the project progresses towards completion. It will be great to one day see a representative example of this remarkable aircraft on display in the nation of its birth! Many thanks indeed to Ugo Vicenzi for providing us with this update.