Beech 18, N13JC, is currently under a return-to-flight program at the Vintage Flying Museum (VFM) of Fort Worth, Texas.  The Twin Beech, a 1954 Beechcraft E18S-9700, construction number BA-31, was gifted to VFM several years previously by the Tarrant County College and had been using the aircraft for several decades as a maintenance trainer. During its tenure at the college, it was discovered to have been previously owned by Jacqueline ‘Jackie’ Cochran, the accomplished record setting aviatrix and founder of the WWII Women Airforce Service Pilots (WASP) organization.  With this heritage, it was decided by the VFM is to use the airplane to honor and promote women in aviation past, present – and future. With that in mind, it was re-registered as N13JC in Cochran’s memory. 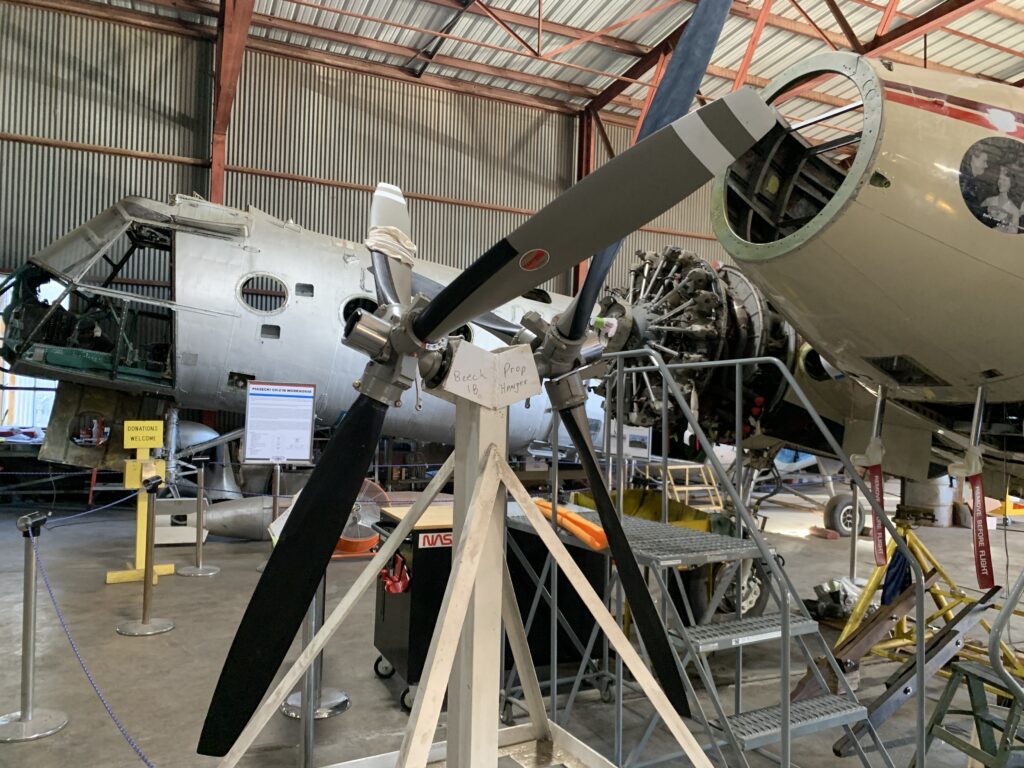 The aircraft was originally purchased by the Williams Brothers Company of Tulsa, Oklahoma, to support their oil exploration activities, including a short stint flying in Venezuela, and being registered by them as N80008, N108WB, YV-P-EPC and N107WB.  In 1962 the aircraft was sold to Arkansas Best Freight System Inc. and based in Fort Smith, Arkansas as N475AB.

According to the National Air & Space Museum, this was the last aircraft personally owned and flown by Cochran, registered as N13JC.  After her ownership the aircraft became the transportation tool of 1970’s television personality Merv Griffin, as N333MG, and used to fly numerous stars around southern California – because of this, the aircraft the restoration team has given the aircraft the moniker of the ‘Hollywood Bomber’!

In August of 2022 VFM Founder Chuckie Hospers, and Director of Operations Bill Gorin, made the decision to prioritize the return to flight of this iconic 1954 Beechcraft.  They asked Bill Goebel of Vintage Aircraft Services, Rhome TX to consider undertaking the oversight and management of the project.  Bill eagerly agreed to become the Hollywood Bomber Crew Chief and support the project on a pure volunteer basis. A kickoff meeting was held mid-August and work on the aircraft commenced immediately.

The aircraft is currently based at the VFM facility located on Meacham airport. The volunteer team include the then-current maintenance team, volunteers that had worked on the aircraft when it was at the college, and many new volunteers; new to both to the project and the VFM.

Again, the project’s first goal is an airworthy return to flight.  Therefore it was decided early on that if this aircraft is to be reliable and service the museum’s needs, concessions from originality would be taken in the interest of safety, equipment simplification, and aircraft reliability. The restoration and refinishing of the aircraft’s period interior and exterior with be accomplished in subsequent phases.

Since August 2022, the team has removed all the legacy avionics and autopilot, their wiring and their associated structure.  A new instrument panel has been hand fabricated to replace the modified instrument panel.

The aircraft will be equipped with Garmin GTN750/GNC255 avionics and GI175 displays. Genesys Aerosystems has stepped up to replace the 70-year-old Lear autopilot with an STEC 55X system.  Hartzell is donating Jasco alternators and regulators for both engines eliminating the generators, carbon pile regulators, and reverse current relays.  The aircraft main power bus will be rewired with new materials.

Richardson Aviation of Fort Worth offered to fabricate new floors for the cabin to replace the sketchy, unairworthy cabin floors.  The crew has removed the vacuum system, repaired the lower fuselage structure, removed the tail feathers, then inspected and reconditioned them to airworthy standard, and refitted them.  Because the Twin Beech had been used as a maintenance trainer by students for decades, it is vital the aircraft is thoroughly checked over in every detail. The team keep finding “Easter eggs” requiring special attention and correction.

The pilot and copilot seats have been disassembled and weld repaired in preparation for reupholstering. The propellers have also been removed to aid engine work. The number one engine has been temporarily removed from the aircraft to install the alternator, replace magnetos, starter, carburetor, and the myriad hoses and hardware.  The engines will also receive oil filters and pre-oiling kits prior to flight.  These new systems will take additional time to integrate. While this restoration may seem to be a Herculean task, nevertheless the team is planning on a first flight in early July 2023, with an airworthy, safe flying aircraft, but not a concours restoration!

The ‘Hollywood Bomber’ team’s work can be in weekly videos on the HangaRatz YouTube channel, https://www.youtube.com/c/HangaRatz.  The team will endeavor to provide monthly update to readers. You may also contact the team direct at hollywoodbomber@gmail.com.