Warbird Digest goes behind the scenes during the making of Spitfire, a new feature film.

An aircraft that represented the pinnacle of piston driven fighter designs might not have been the perfect aircraft to employ in the ground support role, but the French utilized the amazing Grumman fighter against the Viet Minh to great effect.

Warbird Digest launched its inaugural issue at Thunder Over Michigan. WD’s Eric Dumigan and James Church were on hand to document this unique event through photographs. 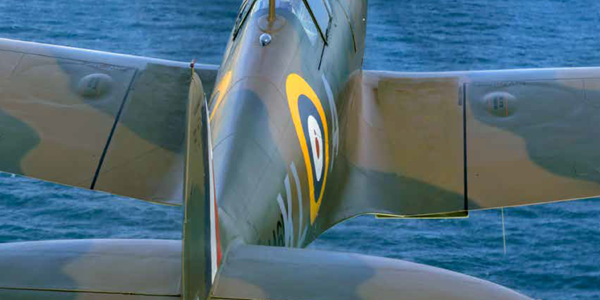 Few surviving Corsairs can lay claim to having actual documented missions flown against the Japanese in World War Two. The latest restoration to emerge from Ezell Aviation can and is a great new addition to the Flying Heritage & Combat Armor Museum’s growing fleet of warbirds.

Kevin Hooey, of Corning, New York, has acquired non-airworthy VB-25N Mitchell USAAF Serial No. 44-86708, an airframe that hasn’t flown in many decades. He intends to conduct a restoration to airworthy condition on the Mitchell, to full World War Two combat configuration as a stock B-25J. Built as a B-25J-30-NC and accepted by the […]

James Kightly documents the history of the surviving Fairey Swordfish. Nearly extinct thirty years ago, we are close to seeing a fourth example take flight.

One of the oldest flying Corsairs in the world
is F4U-1A BuNo 17799, based at the Planes
of Fame (POF) Museum in Chino, California.
For many years, museum of ficials have
suspected the Corsair had seen combat in
World War II, but never found documented
proof, until author Michele Spry interviewed
a Corsair pilot for a children’ s book. Spry’s
research revealed three living Marine pilots
who flew the POF Corsair in combat. Spry and
Planes of Fame Museum sought to reunite
these heroes with their plane.

In 1956, B-29 s/n 44-69972 was among 50 Superfortresses that were parked in the desert at China Lake. They were to meet an ignominious end as targets for ballistic missiles; however, luck spared a plane named DOC that was all but forgotten. When Tony Mazzolini decided to search for a B-29 to restore to flying status in 1987, everyone told him there were none left, until he heard about DOC. This is the story of the three-decade odyssey that culminated in DOC returning to the skies.

When the CAF Capital Wing took possession of a tired, old surplus bug sprayer/fire bomber, the members knew the restoration would be a long-term affair. Fourteen years later the wing celebrated success with its successful return to flight. This story documents the aircraft’s history and offers an intimate account of the men of the original […]