As many of our readers will be well aware, Avro Lancaster B.VII NX611 Just Jane is under restoration to airworthy condition with the Lincoln Aviation Heritage Center at former RAF East Kirkby in Lincolnshire, England. We have been reporting on their progress periodically, and we thought that our readers might like to see their most recent report, reproduced here with permission…

We had a great meeting with the Battle of Britain Memorial Flight (BBMF) team regarding their structural work in the coming months and years, updating them about our work; just another part of our close working relationship.

One of the team made the long road trip back up to Cumbria to collect the wing tip extrusion. This item had been undergoing heat treatment to T511 standard at Capalex. Now that the extrusions are back with us, the set for the BBMF will be collected by ARCo from Duxford. We can copy drill them from the originals to build up the web and the basis of the wingtip rebuild. Once the extrusions are drilled, the chords and web will be offered up to the wing to make sure they fit properly before the whole wingtip is built and buttoned up.

Our team driver has also been back down to Mark Cole and Simone Cunningham on the south coast to collect parts for the starboard wingtip. They also dropped off a skin for the rear fuselage which has a complex curve needing Simone’s skills to wheel it. Indeed, the other skin for the rear section took five hours to wheel! The shaped stringers are among some of the parts returned following Simone’s handiwork; you can see one of these in a photo further below. When you see the amount of curve in the stringer, it really illustrates how much curve there is to the wingtips. When seen mounted in place on the wing, it’s hard to realize the amount of curvature there is in this relatively simple structure.

The port wing tip is continuing through the rebuild stage. As it is built up with original parts, new parts are swapped in and drilled off for refitting. It’s a very time-consuming job, but ensures that the structure does not change shape.

We’ve had another batch of parts go through the paint shop with Martin and Keith. This includes many of the skins for the starboard wingtip and the stringers, and requires the reinforcing strip be riveted in before it can go back into the main structure.
Next week should see many of the brackets in the port wingtip structure drilled off, and a lot of the structure ready for paint.

Jack has been progressing the rear fuselage with all of the new intercostals trial-fitted and drilled off. The new former has been trial fitted and drilled, off and the bulkhead has been offered up ready to be drilled off next week. Very shortly, the rear fuselage parts will be ready to be removed and painted ready to be final-fitted to the rear fuselage. Once the rear structure is riveted in place, Jack can move on to reconstructing the bottom of the turret section and refitting the ‘hoop’ that the turret sits in. We’re still waiting on the new turret ring, which is spun steel, but it hopefully won’t be too long before it has been produced and can be trial-fitted to the ‘hoop’ and copy-drilled from the original.

It was mentioned in the previous Rivet Club email that we are in need of a bunch more Cleco pins. The response to this has been remarkable, with five donors contributing to the costs, and one supporter covering the cost of the pins entirely. We are extremely grateful to all those who have helped with this extra expense. The money donated over and above what was required for the Cleco pins has enabled us to purchase a ‘Linisher’, a piece of equipment which will make the trimming and filing of skins and structure much quicker – saving the project time and money in the future.

We have just received notification from Aircraft Extrusions in the USA that our order is complete. This goes back to the order for fuselage stringers (the whole reason we had to change the plan for this winter to rebuild the wingtips instead of the rear fuselage section) and the fin spars. So, very shortly, we are going to have a £7,500 invoice to pay – an added expense this winter that was not factored into the original budgeting. If anyone would like to support the stringer and fin post costs with a further donation, then we would be extremely grateful of the support. If you were to make a donation HERE, then it would be great to see you adding in the comments section that it is for stringers/posts – just so we can keep track of progress more easily. It’s good to know we will be one step ahead of the curve for next winter when we tackle the rear fuselage.

Thanks for your support!

P.S. Don’t forget to checkout our new RAF Blue/Grey Rivet Club t-shirts on the links below. We have changed the colour from the khaki green to try and offer some variation. I could see no better colour than RAF Blue/Grey! 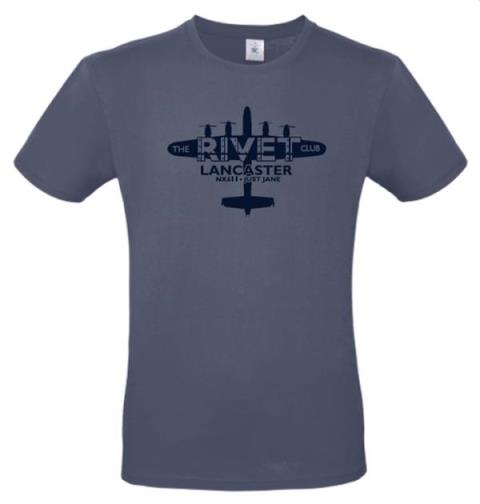